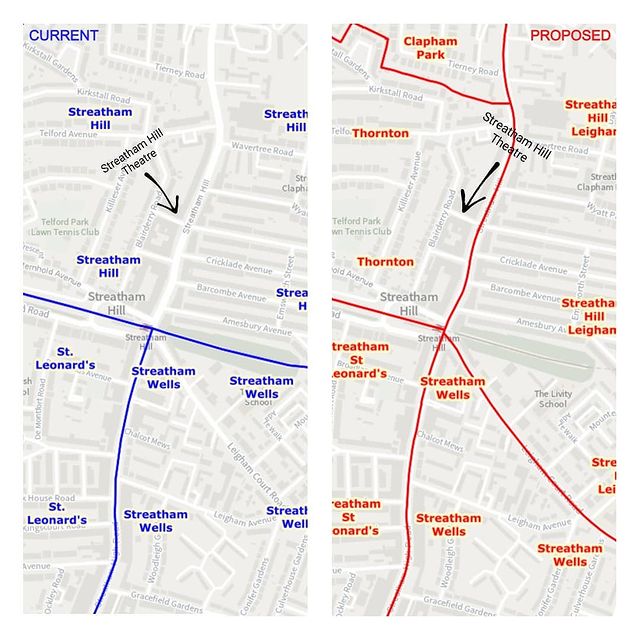 Theatre to be relocated from Streatham Hill to Thornton?

The Boundary Commission has proposed changes to local ward boundaries, meaning that Streatham Hill Theatre would now be in Thornton! We are objecting to this change, as described below.

Have your say on the Boundary Commission web site by April 12th.

The Friends of Streatham Hill Theatre, a registered charity with 1,100 members, object strongly to the Boundary Commission’s proposals which we regard as damaging to the community and businesses in Streatham Hill.

The proposals fail to meet the central requirement to “reflect community identity”, which should not be given less weight than other considerations.

The identity of the area would be fractured by splitting Streatham Hill ward into four component parts.

Worst of all for the aspirations to revive the Streatham Hill Theatre is the proposal to move it and the adjacent community into a ward which will not identify with Streatham.  This is evidenced by Thornton Ward not even being included in the section of the proposals dealing with Streatham (paragraphs 160 to 189).

The current focus of Streatham Hill Ward and its community is the A23 Streatham Hill.  The current boundaries of the ward, straddling the road, recognise that and the history of the area.  Streatham gets its name from being the ‘village’ on the ‘street’  (Streat – ham). Its whole history and development reflect that.

To split the area up, using Streatham Hill as a boundary completely negates that historic reality, reflected for example in the long-standing SaferA23 campaign uniting community concerns east and west of the road and major proposals by Transport for London to transform that section of the A23 into a safer place for pedestrians and cyclists, and overcome the severance produced by the current dual carriageway layout. Residents on both sides of the road are united by common concerns, whether they be about highway safety or retail and commercial development, and community safety.

The area has been treated as an entity in council proposals and policies, and the council supports the campaign to revive the 2,800 capacity Streatham Hill Theatre, on the west side of the A23 at Streatham Hill, into a thriving cultural hub as a key driver to the regeneration of the area.

The Draft Revised Lambeth Local Plans states: “The Council will support the regeneration of the former Streatham Hill Theatre to become a major leisure and entertainment venue alongside workspace for creative and cultural industries” . The Streatham Investment and Growth Strategy 2019-30 sets out as a priority exploring the feasibility of refurbishing and rejuvenating the theatre, and says that “successfully restoring this building would bring significant improvements to the public realm and historic/cultural fabric of the area, as well as delivering against a number of other objectives presented in this strategy (e.g. Strengthening and Diversifying the Town Centre).”

The restoration and revival of  the theatre, which has been designated an Asset of Community Value, have the active support of the Mayor of London, the GLA, the Theatres Trust, and leading professionals.  An independent Viability Study and Economic Impact Assessment, which has been crowd-funded with additional contributions from the GLA, the Theatres Trust and Lambeth Council, has been looking at options for the venue.  The Friends were recently registered as a Charitable Incorporated Organisation and are driving  moves to restore and reuse the theatre, a campaign which has huge local buy-in and support.

The theatre, together with surrounding residents and that part of the Streatham Business Community, would end up under the commission’s draft proposals in a ward represented by just two councillors whose clear focus would be on a community which identifies with Balham and Clapham.  The draft proposals are based on the consideration that the Hyde Farm area “looks towards Balham” and part of Streatham Hill is being hived off to make up the numbers.

The theatre belongs at the heart of the Streatham Hill area, as it is currently, in a strong three-member ward.  It shouldn’t be put on the periphery of a non-Streatham ward.  This would be hugely damaging both to the project itself and the regeneration and development of the wider area.

Have your say on the Boundary Commission web site by April 12th.

The full press release is here.